***This article was published on Grower Talks.***

Nearly 45 years ago, Wadsworth Control Systems installed its first curtain system—a blackout at Irwin Greenhouses in Canyon, Texas. The system ran on a time clock to maintain a balance of day and night, creating the necessary environment for the crop of kalanchoes, chrysanthemums and poinsettias. To a lesser degree, the curtain addressed a second need, one that had just arrived in every American’s life. Pictured: Curtain system in the peak of a greenhouse roof.

In 1973, the United States, which was heavily dependent on foreign oil, found itself high and dry when OPEC instituted an oil embargo. Propane and natural gas prices spiked. Saving energy was imperative, not only in terms of cost, but also availability. The demand for a more sophisticated method of managing greenhouse environments became essential.

By the late 1980s, environmental controls were capable of basing curtain coverage on temperature and time. Energy fabric, a breathable version that allowed light to pass through, was available. Growers reported savings of 30% to 40% on energy costs. And they were right—today’s industry standard for energy cost savings on a curtain system is 40%.

While energy savings remains a key asset of using controls to operate curtain systems, advances in technology and best practices for crops have expanded benefits and opportunities. The economics of installing an automated curtain system are conclusive. When asked for the No. 1 benefit, growers offer several responses, but ultimately, “It comes down to plants and money,” said Nathan Donley, who was head grower after many years doing vegetative propagation at Timbuktu Plant Company, and now oversees greenhouse production and research at Ohio State’s ATI campus.

Heat retention settings are based on outdoor sensor readings sent to the control. While night is the typical time to cover for heat retention, a control will cover during the day when temperatures and light levels fall below the parameters set in the control. When a curtain is covering a crop, the area being heated is much smaller. The curtain itself, combined with the attic area above, gives a total R value in the range of 1.5 to 2.0.

The same scenario is true for cooling and shading. It’s less expensive to cool a smaller space with the added benefit of an insulating air pocket above the curtain. Integrated controls base curtain responses on indoor sunlight and temperature.

Using the STEP Up—a staged control—Wirt Warren of the Warren Family Garden Center in Leeds, Alabama, bases curtain response on temperature. When the maximum allowed temperature is reached in his naturally ventilated garden center, which is used for growing during the off-season, the curtain covers 90%, and the hot air is pulled into the attic space and drawn out through the roof vent.

“We do a forced override to close it earlier on those especially hot summer days, keeping it comfortable for customers. The longer they stay there, the longer they shop,” said Wirt.

When the forced override ends, the control will resume managing using normal settings. “We used to do that manually, but learned that with a timed override, the control resumes on its own. We don’t need to think about it,” he explained.

A well-managed curtain system not only saves on heating and cooling costs, it results in a better crop. Stuart Raburn at Southern Organics in Columbiana, Alabama, points out that “stressed plants are more prone to bad bugs and disease.  Having the shade pulled automatically when the control senses high solar radiation levels gives us happier plants.” 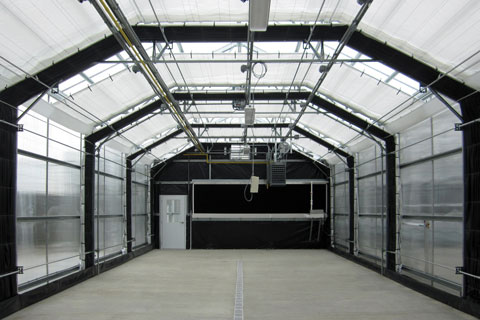 Pictured: Curtain system in one of the research greenhouses at the Ohio State University OARDC. Photo courtesy of Amanda Debevc.

During cooler months, controls transition greenhouse temperature by opening the curtain incrementally to mix the cold air above the curtain with the warmer air below, which prevents cold air shock and is gentler on the plants.

Sam Bridge, of Sam Bridge Nursery & Greenhouses, said, “We use it for everything—preventing heat loss, shading for sensitive crops, acclimation of new plants and finishing off plants when the temperature needs to stay cool. The quality of the crop has really improved.

Sam also said he’s seen a significant savings on labor. High costs and a scarcity of workers have created a vacuum that automation can help alleviate.

Stuart, who’s been a grower since 2014, said, “My premise in starting the farm [after 26 years in IT] was to marry technology with controlled environment agriculture to address the No. 1 cost: labor.”

Nathan agrees, “Labor is the No. 1 missing resource.”

A workforce that uses controls to manage environments is lean and offers jobs competitive with other computer-based positions, drawing young growers to the industry.

Curtain coverage based on sunrise and sunset, which the control tracks throughout the year, creates opportunities for automation—including negative DIF, also known as morning drop or dip. Growers assign time periods based on a 24-hour day. Each period has temperature set points, a target range specific to the time period.

A DIF period typically begins one and a half hours before sunrise, when the curtain uncovers, vents open and cold morning air is introduced. The climate is maintained for a few hours until the next period, typically day, begins an increase in temperature. This complex series of actions involves several pieces of equipment, and without integrated technology, would be difficult to achieve.

County light pollution ordinances are another good use of basing curtain responses on sunrise and sunset tracking by the control, allowing growers to take advantage of every bit of free daylight. Automation allows growers to align supplemental lighting and curtain coverage to meet ordinance requirements.

Combining controls and curtains can provide peace of mind in an emergency. To help protect the physical greenhouse, controls use outdoor precipitation and temperature sensors to determine when the curtain will uncover, melting heavy snow before it damages the structure. Controls can force curtains to respond during a fire alarm condition and dictate that the curtain remain in service when using a backup generator during a power outage.

Measuring light levels is important for commercial growers who ship across the country.

“When shipping to a very different climate, say Ohio to Texas, you begin the transition by working toward a duplicate environment,” said Nathan. “A week before shipping, you would increase the light level each day, preparing the plants for a successful arrival.” The controller gauges and responds according to grower settings.

Stuart uses his system during harvesting in warmer months. “We use the shade cloth to extend the morning harvest time because the crop, mostly leafy greens, is crisper under a shade curtain,” he said.

Blackout systems, or light deprivation curtains, have made great strides since the first Wadsworth system was installed. Today, a grower with a blackout might have a dual curtain with a shade system below the light deprivation level. When opening the system, the control can be set to uncover the light deprivation first, which is known as the “sunrise effect.” Two curtains opening separately allow for a second mixing of the air, making the transition easier on the plants.

Curtain automation is inherently tied to improving crops and saving energy. These demands have driven additional functionality and increased the overall value of using a control to manage the curtain system. An added benefit for growers is more time and quality of life.

“With the control managing the curtain, I have time to focus on the plants,” said Sam.

At the top of Stuart’s list on the Friday afternoon when we spoke, “We don’t have to be at the greenhouse every day. We can take the weekend or Sunday off. The plants are happy on Monday morning … and so are we.”

This site uses Akismet to reduce spam. Learn how your comment data is processed.